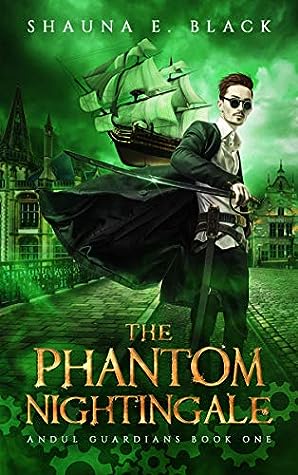 Synopsis
Blind and with a crew of kids, he's about to risk everything for a lost sister

Xanthe has a magical voice that can transport him almost anywhere, and he's used it to rescue countless kids heading for slavery. But when news of his lost sister filters through, he knows he must investigate. Even if that does lead him straight into the den of those who want his head.

A new series full of action, adventure, intrigue, and a dash of romance.

Review
A mix of steampunk, pirates, and magic that may unravel time itself!

This book took a while to get into, as I think I was misled by the blurb.
Yes, Xanthe finding his lost sister is what drives the plot; and the pirate ship full of kids does play a part later on - but this book is primarily about his first-mate Brayde, and academy girl Avilene.

Brayde has been working tirelessly with Xanthe, ever since he was rescued from slave labour as a kid; and now in turn, they save as many as they can. They fight against a government that routinely takes 'recruits' from families, not caring that these children are too young, and throwing them into dangerous work. Those born with magic are treated as dispensable property, that have to serve the system in any way they can.

Avilene is one such victim. She was born with magic, but was pushed to the point of breaking by Superintendent Proteus. She considers herself one of the lucky ones, as she got a place in Yugend Academy, so she spends her days training; planning to get away from Proteus; and trying to spare her magical friend Lorelei any pain she can.

They meet when Brayde and Sicarah (who is amazing), go undercover at the Academy, posing as new recruits, to try and find information on Xanthe's missing sister.

I really enjoyed this. You have the perfect mix of adventure and intrigue.
They are basically pirates, in a flying ship. Oh, and the ship can 'slip' locations, because Xanthe is a magical person descended from aliens.
With so many components, it could easily get out of hand; but Black makes the story believable, every step of the way. She perfectly balances the world-building without ever overwhelming the reader with information.

The story is fun- it broaches some serious plotlines without being too intense.
It also has the romantic aspect between Brayde and Avilene, which plays a part, but it never felt like it was over-shadowing the rest of the plot.

Overall, this was a great start to a series, and I can't wait to read more.