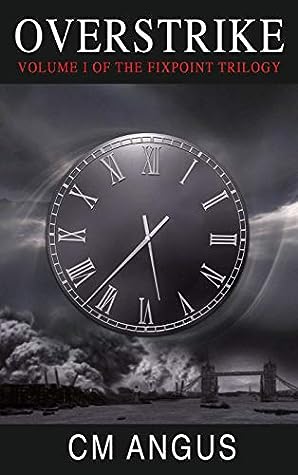 Synopsis
When Matt Howard’s grandfather told him he must alter history to protect his newborn son, Matt thought the old man was crazy…
…Then he realised it was true.
Overstrike spans 4 generations of a family haunted by the prospect of an approaching alternate reality where their child has been erased from history.
Touching on themes of retro-causality, ethics and free will, and exploring ideas of cause, effect and retribution, it follows the path of Matt Howard, whose child, Ethan, is at risk, as he, his father and grandfather attempt to use their own abilities to manipulate reality in order to discover and prevent whoever is threatening Ethan.


Overstrike is volume I of Fixpoint, a trilogy about a family who discover their inherited ability to manipulate reality. It enables them to effect changes in order to safeguard themselves and all that they hold dear. But even seemingly small changes in a timeline can have unforeseen and far-reaching consequences. Follow the stories of the Howards, on a journey exploring reality, time and our own sense of self.


Volume I of the Fixpoint Trilogy

Review
The Howard family can change the past, to fix the future. Now their newest member is in danger from an unknown force.

This was a neat idea, with some members of the Howard bloodline able to change past events. I liked how they could see the various alternate realities shifting in front of them, where someone hadn't died, or an accident hadn't happened. They can (some with more control than others) choose to bring the alternate timeline into existence.

Unfortunately, I didn't get on with the narrative.
It's in first person, with multiple POVs and head-hopping. Along with the ever-shifting reality, I felt like I was getting whiplash, trying to keep track.
The main characters are interchangeable and all had the same voice, which didn't make things any clearer.

Overall, this was a great idea, with poor execution.