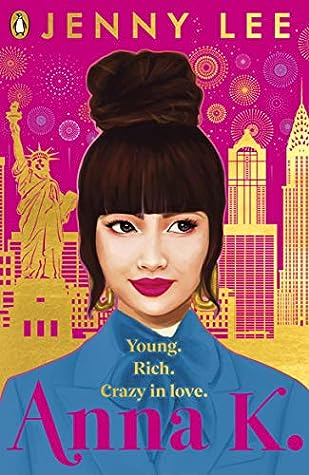 Synopsis
Welcome to the dizzying heights of New York's Upper East Side: where privilege, partying and scandal rules.

And Anna K knows the rules by heart. Beautiful, rich and popular, she takes care to maintain her status as the perfect girlfriend, daughter and student.

Then a chance encounter at Grand Central station with notorious playboy Alexi 'Count' Vronsky changes everything. Anna knows she needs to avoid Alexi, but sometimes fate has other plans . . .

Soon Anna finds it impossible to resist him, and finds herself willing to risk everything she has to be with him - no matter the consequences.

After all, the course of true love never did run smooth . . .

Perfect for fans of Crazy Rich Asians, Gossip Girl and American Royals, ANNA K is an addictive, romantic and subversive reimagining of Leo Tolstoy's timeless love story, Anna Karenina ? and above all, it is a story about the dizzying, glorious, heart-stopping experience of first love and first heartbreak.

I received a free copy from Netgalley, in exchange for an honest review.
I will precede this by saying I have never read of watched any incarnation of Anna Karenina, so I am clueless to how similar Anna K. is to the original. I don't know which ideas and storylines are purely this author's, and which echo Tolstoy.

It starts with Anna's brother Steven, who is caught cheating by his girlfriend. Anna is brought in to see if she can save the relationship; and meets Count Vronsky. Despite being in a serious, long-term relationship with Greenwich royalty, Anna starts to question her feelings, and her sense of duty to her boyfriend's family.
There are multiple other relationships covered in this book, but those are the main ones.

This book was... intense.
There were parts that I really enjoyed, with the relationship between Anna and her brother being very sweet and endearing, underneath all the craziness.
I liked Kimmie and Dustin's story (and the extended family/friends). Kimmie is nothing more than a pretty face, mooning over her crush, as though it's the end of the world. I liked that she did (eventually) move on from that, but in her own way, not conforming to what society expects.
Dustin and his drug-addict brother have an interesting relationship. Dustin is younger, so he has to balance his history of worshiping his older brother, and trying to figure out how many more chances he should give him.

The not so good...
I didn't like the third person omniscient narrative, where it is constantly head-hopping.
I was curious, as this isn't a very common choice for narratives in modern books. I confess, I googled it and found out that Tolstoy did the same thing, so maybe it was a conscious choice by Jenny Lee.
Either way, it didn't work for me.

There is alot of excess in here.
The drugs in particular. I found it excessive and unnecessary. I don't think there was a single page without some reference to drug use/actual drug use.
Along with the constant partying, this may be authentic, for all I know; but it made everything very repetitive and long-winded. They're having another outrageous party and doing more outrageous drugs-as-though-they-were-sweets. And repeat.

I thought the lives of these kids was bloody extreme.
I mean, the cast are all about 15 - 17 years old. I get that they're rich kids, and mummy and daddy provide the clothes, cars, horses and anything else they could ever want. But they're having intense relationships, and having to make choices that you'd expect from people twice their age.
Yeah, sure, maybe one or two; but this is the whole cast.

(p.s. a gelding is a MALE horse with his balls chopped off; not a female)

Overall, despite some interesting storylines, this was too slow and rep for me.