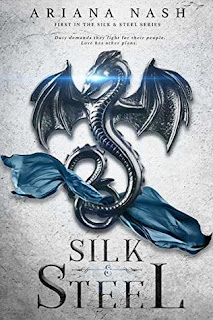 5 out of 5
Synopsis
The Dragon Queen’s reign is one of darkness and death. Humans have vanished under the rubble of their world and if the queen has her way, elves will be next.
Eroan, one of the last elven assassins, lives for one purpose: kill the queen.
He would have succeeded if not for her last line of defense: Prince Lysander. Now, captured and forced into the queen’s harem, Eroan sees another opportunity. Why kill just the queen when he can kill them all? It would be simple, if not for the troubled and alluring prince. A warrior, a killer, and something else…, something Eroan finds himself inexplicably drawn to.
Trapped in a life he despises, Lysander knows his time is running out.
If the queen doesn’t kill him for his failures, her enemies will. There’s nothing left to live for, until an elf assassin almost kills him. A stubborn, prideful, fool of an elf who doesn’t know when to quit. An elf who sparks a violent, forbidden desire in Lysander.
If Lysander can’t save himself, maybe he can save the elf and maybe, just maybe… one stubborn elf will be enough to bring down the queen before she kills them all.
Duty demands they fight for their people. Love has other plans.
Warning & Reader Advisory:
Silk & Steel is not a "romance".
This series is a DARK FANTASY intended for mature readers. While Silk & Steel is a love story, it is not for everyone. It is not categorized on Amazon, and not sold as m/m romance. It DOES feature a strong m/m LOVE STORY that develops over three books.
Silk & Steel features a gay dragon shifter, a bisexual elf, and adult themes. There is triggering content that some readers may find distressing, including implied incest, abuse, violence, dubious consent, and on-page sex. None of these instances are gratuitous. There is heterosexual sex and gay sex. The intense and star-crossed relationship between the two male leads develops over three books.
Review
Prince Lysander stops an elf assassin from killing the dragon queen; and finds an ally where they might both be free from her tyranny.
I confess I bought this a few days ago, and after seeing some recent reviews, it kinda skipped to the front of my reading queue.
Lysander is a dragon shifter, and the second son to the ruling Amethyst queen.
All of his life, he has been dismissed as weak and broken, because he is different. His mother is cruel and manipulative. She's the strongest dragon alive, and makes it clear that she could kill him if she wished. She's managed to twist this thoughts so solidly, Lysander is in a cage of her making.
All Lysander wants is to be free, but he knows that can never happen as long as his mother rules.
Eroan is from an Elvish order of assassins. He is the best they have, and has been tasked with one mission - to kill the dragon queen. When he's stopped by Prince Lysander, he's thrown into a prison, tortured and abused. He refuses to die and refuses to give up on his mission, even when given the chance to escape.
This book has all the triggers. The author supplies a handy list of them, so you have been warned.
I agree with her assessment that it is not a m/m romance.
Although there is a growing attraction between Lysander and Eroan, and you're rooting for the pair of them throughout the book, it is not the main focus.
This is a Dark Fantasy set mainly in the courts of the dragon shifters.
The dragons have already won the war against humans and elves (who are all but extinct), but they have never lost their desire for power and dominance. The relatively-new race of Amethyst dragons are the most powerful, and rule over all.
The queen uses her magic and might to subdue the other dragons, to force them into constant submission. She's relentless and ruthless and won't settle for weakness - even killing her own daughter, than allow a weak link.
There is violence, and graphic sex (again, the sex doesn't overwhelm the rest of the story, it adds to the plot). It's bloody and brutal, because that is the world of the dragon-shifters.
I really enjoyed this book, and I look forward to the sequel.
Goodreads
Amazon
adventure Dark Epic fantasy Intrigue LGBTQ paranormal reviews romance sexy