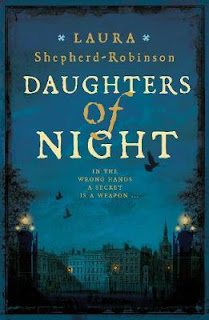 5 out of 5
Synopsis
From the brothels and gin-shops of Covent Garden to the elegant townhouses of Mayfair, Laura Shepherd-Robinson's Daughters of Night follows Caroline Corsham, as she seeks justice for a murdered woman whom London society would rather forget . . .
Lucia’s fingers found her own. She gazed at Caro as if from a distance. Her lips parted, her words a whisper: ‘He knows.’
London, 1782. Desperate for her politician husband to return home from France, Caroline 'Caro' Corsham is already in a state of anxiety when she finds a well-dressed woman mortally wounded in the bowers of the Vauxhall Pleasure Gardens. The Bow Street constables are swift to act, until they discover that the deceased woman was a highly-paid prostitute, at which point they cease to care entirely. But Caro has motives of her own for wanting to see justice done, and so sets out to solve the crime herself. Enlisting the help of thieftaker, Peregrine Child, their inquiry delves into the hidden corners of Georgian society, a world of artifice, deception and secret lives.
But with many gentlemen refusing to speak about their dealings with the dead woman, and Caro's own reputation under threat, finding the killer will be harder, and more treacherous than she can know . . .
Review
When her friend is murdered and the official investigators seem keen to brush it away; Caro employs a thief-taker to help her uncover a world of prostitution and danger.
I received a free copy from Netgalley in exchange for an honest review.
This has some of the same characters and settings as the author's previous book: Blood & Sugar. It is a stand-alone, and I didn't feel at a disadvantage for not having read the other book.
Caroline "Caro" Corsham was meeting her friend, an italian noble Lady Lucia. Her friend is killed before her eyes, but despite the crowd no one saw the murderer.
When the official investigation refuses to look into the matter, Caro employs Peregrine Child, a thief-taker that once aided her husband. They soon uncover that Lucia was not a noblewoman, but a famed London prostitute, Lucy Loveless.
Despite this, Caro still swears to get to the bottom of her friend's murder.
Child is most content at the bottom a gin bottle, to try and forget his past. Unfortunately, he's racked up quite a debt and, when Caro offers him employment, he is keen to take it.
Despite some crooked implications in his past, he is a man of honour and integrity, and quickly respects Caro.
They work together and make a great team, undaunted by the growing threats around them.
The cast of characters grows, looking into the lives of various women, who in their very different classes are all judged and condemned swiftly, by both the men that rule society, and other women who perpetuate social rules and expectations.
I really enjoyed this book. It strikes up a fine balance between historically-accurate, informative and entertaining.
Following Caro and the prostitutes, the story felt very realistic and compelling. Despite the sordid nature of whores, there was no glorifying their sexual conquests, and I never felt that any part of their lives were used for pure sensationalism.
The whores in this story have chosen to make the most of this career, while they are young and beautiful.
I really liked Caro as our main character. She has a strong sense of right and wrong, and doesn't care about upsetting the status quo of her social circle.
She is restricted by her gender - at first being her father's daughter; then her husband's wife.
As a sign of the times, when her husband Captain Corsham is away for an extended period of time, Caro and her on are given to the care of her pompous older brother.
Despite being a very intelligent woman, her life and her finances are in complete control of men.
Caro doesn't rail or whine against the unfairness of it all; she doesn't complain about the situation she's got herself into, as she knows that will not help her. She simply proceeds in a logical manner, until she gets her own way.
The murder mystery was very well done. It kept you guessing throughout who could be trusted, and who was the real culprit. I have to admit that I never saw the truth coming, and I was completely hooked for the second half of the book, I couldn't wait to find out what had happened and why.
It goes down some very dark and dangerous paths, with several shocks along the way.
I thoroughly enjoyed this book, and look forward to reading more of the author's work.
Goodreads
Amazon
Dark Historical Intrigue Mystery NetGalley reviews Thriller