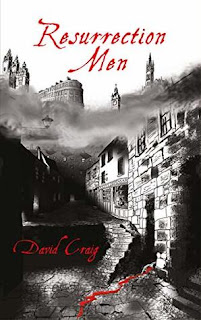 3 out of 5
Synopsis
Glasgow 1893. Wilton Hunt, a student, and Tam Foley, a laudanum-addicted pharmacist, are pursuing extra-curricular careers as body snatchers, or ‘resurrection men’, under cover of darkness. They exhume a girl’s corpse, only for it to disappear while their backs are turned. Confused and in need of the money the body would have earnt them, they investigate the corpse’s disappearance. They discover that bodies have started to turn up in the area with ripped-out throats and severe loss of blood, although not the one they lost. The police are being encouraged by powerful people to look the other way, and the deaths are going unreported by the press. As Hunt and Foley delve beneath the veneer of respectable society, they find themselves entangled in a dangerous underworld that is protected from scrutiny by the rich and powerful members of the elite but secretive Sooty Feathers Club.
Meanwhile, a mysterious circus arrives in the middle of the night, summoned as allies to help avenge a betrayal two centuries old…
Resurrection Men is the first book in David Craig’s Sooty Feathers series, a masterful gothic tale about a supernatural war for control of the Second City of the British Empire, and the struggle of flawed characters of uncertain virtue who try to avert it. It is set in a late 19th century Glasgow ruled by the undead – from the private clubs, town houses and country estates of the privileged to the dung-choked wynds and overcrowded slums of the poor. Undead unrest, a fallen angel, and religious zealots intent on driving out the forces of evil, set the stage for a diabolical conflict of biblical proportions.
Review
Hunt and Foley are stealing bodies from the grave, in the name of science and money. The disappearance of one dead girl leads to the underground world of vampires in Victorian Glasgow.
I received a free copy in exchange for an honest review.
Wilton Hunt is the only son of a rich family with ties to nobility. Instead of blindly following in the family business, or taking on a respectable career in law; he follows his dreams and studies sciences in Glasgow.
Proving that he can live independently of his parent's money, Hunt shares rooms with a laudanum addict/alcoholic Foley. They work together to provide a local professor with fresh corpses, and are paid well for their services.
When one of these corpses vanishes, they try and track her down, only to find that the girl is undead, roaming the streets, killing others...
Hunt and Foley follow the mysterious trail, driven to uncover the truth.
It soon becomes clear that there is a much bigger world hidden in plain sight. There's secret societies, vampires and Templars, all battling it out in Glasgow.
I liked visiting Victorian-era Glasgow. The author makes it feel real, and supplies plenty of details for the location.
The plot is well done, as again, it feels realistic. Monsters living in the shadows, and lots of dangers at play, as Hunt and Foley go from not-entirely-legal body-snatchers, to tracking down secret societies and undead murderers.
There are some interesting parties that are followed in the shared narrative, as the picture is slowly built by the vampires; their allies; and their enemies.
The story does have some dark moments, but I wouldn't say it was pure horror. With Hunt & Foley's innocent curiosity, it feels more like a murder mystery with a paranormal flair.
Which I find a bonus, as some horrors can be too doom and gloom in my opinion.
The not-so-good
All the characters - the laudanum-addicted working class Glaswegian; the rich chap striking out on his own; the foreign Templar knight; the upper-class lady seeking revenge; the undead murderer on a killing spree - such a wonderful array of characters, but they all had the same voice.
They may have been verbally saying different things, but all the characters blurred into one. No personality stood out. And because this is a big cast production, with several stories being followed at once, it made it that much harder to recognise the characters when you jumped from one scene to another.
The characters actions and general purpose throughout the book didn't always hit the mark.
Whether it was Steiner torturing someone, or Hunt chasing demons, a fair bit felt perfunctory and distanced.
A couple that stood out most for me was Foley's laudanum/alcohol addiction. It's mentioned a couple of times, in the same throw-away manner that you might describe a character having brown hair. There's perhaps one instance where it's mentioned that Foley wakes late and with headaches; but I never thought it was part of his character.
Amelie was... frustrating. She's a beautiful young French lady, whom Hunt starts to court.
Her part was completely perfunctory, she plays the potential love interest, although we never know how Hunt actually feels. Yes, at the beginning he's tongue-tied because of her beauty; but we're following his actual thoughts in the narrative, and he never <i>thinks</i> of her when they're not together. And even when they are together, he never thinks of her in a way that he thinks of every other associate. I know this is the austere Victorian era, but this young man in the privacy of his own head never admires Amelie, he never even thinks of stolen kisses or how much he likes her company.
I was beginning to wonder if he was courting her to satisfy his parent's expectations, or even to piss off Amelie's brother; but then during a certain scene it's revealed that he thinks he could love her. One sentence. Gone. Never mentioned again.
Overall, this was a good story and the author has potential. I would be interested in reading more of their work.
Goodreads
Amazon
Dark Demons fantasy Historical Horror Intrigue Mystery paranormal reviews vampires