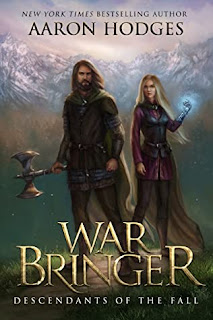 4 out of 5
Synopsis
Centuries ago, the world fell.
From the ashes rose a terrible new species—the Tangata.
Now they wage war against the kingdoms of man.
And humanity is losing.
Recruited straight from his academy, twenty-year-old Lukys hopes the frontier will make a soldier out of him. But Tangata are massing in the south, and the allied armies are desperate. They will do anything to halt the enemy advance—including sending untrained men and women into battle. Determined to survive, Lukys seeks aid from the only man who seems to care: Romaine, the last warrior of an extinct kingdom.
Meanwhile, the Queen’s Archivist leads an expedition deep beneath the earth. She seeks to uncover the secrets of the Gods. Their magic has been lost to the ages, yet artefacts remain, objects of power that could turn the tide of the war. But salvation is not the only thing waiting beneath the surface. Something else slumbers in the darkness. Something old. Something evil.
Review
The Tangata are a plague against the surviving human nations. Can the search for missing relics and gods' magic be the answer?
I received a free copy in exchange for an honest review.
The story is split between a few narrators, starting with Romaine - a Calafe farmer-turned-warrior whose home was overrun by the Tangata.
After watching his family and his follow-warriors die, Romaine is going through the motions, refusing to get close to other people, and waiting for their inevitable destruction.
When he finds himself lumbered with the most useless soldiers in the army, and a mysterious girl who also seems to be from Calafe; Romaine starts to fight for more than survival.
Lukys is shocked to find out what people really think of the Perfugian recruits.
All Perfugians are educated as equals, and at graduation each year a select group are given the honour of joining the Flumeeren army. It is widely known that Perfugian fighters are respected and revered... until Lukys gets to the frontline of the war and learns that Perfugian's are one step up from useless, and are basically used as cannon fodder.
Lukys decides that he doesn't want to roll over and die, and pesters Romaine into training him, so he at least has a chance.
Erika is the Queen's Archivist. She is extremely intelligent and single-minded in her pursuit of the historical artefacts that might turn the tide of the war.
After finding a gauntlet with a deadly power, and a map to more hidden sites, she seems to finally be on the right track - a relief for Erika, as the Queen is growing weary of her failures, and has made it clear that Erika won't be allowed to fail again.
Erika's people skills are poorly lacking, as she ends up getting Romaine and his Perfugian trainees as her escorts into the Tangata-filled Calafe.
I really enjoyed the world that Hodges has created.
We're in the middle - if not the end - of a war between the Tangata and humans. Calafe has already fallen, and it's only a matter of time before Flumeer does too.
You get the sense of urgency and despair from Romaine and the other soldiers stationed at the front; but the story never gets too bogged down in darkness. They're already in the middle of the big fight.
The Tangata are interesting creatures - they look human enough, except for their grey eyes. I got the feeling that they might once have been human; and with their crazed, almost animal nature there was definitely a zombie vibe (World War Z-style fast and deadly zombies, not Walking Dead).
I'm interested in seeing how these evolve throughout the series. So far, they've only shown a desire for hunting and killing humans, with only a couple of glimpses at more unusual behaviour.
The not-so-good.
I thought it lost its pace a little in the last third. I was surprised that the mission was abandoned so close to goal, especially after how tenacious Erika was.
Erika was not a likeable character. I think this was the point, but it meant that I didn't enjoy reading her narrative as much as the others.
I can understand her motivations, but she's selfish and has an inflated ego.
I think the worst part of her character is that she knows that she's probably taking these men to their deaths, and that she should feel guilty about it; but she chooses not to.
Overall, this was a really good story and I look forward to the rest of the series.
Goodreads
Amazon
adventure Epic fantasy Intrigue paranormal reviews witches