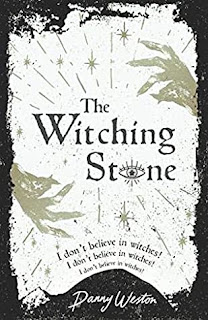 Beneath this stone lie the remains of Meg Shelton, alleged witch of Woodplumpton, buried in 1705.

After a messy breakup with his girlfriend, Alfie needs to get away for a while – so he decides to spend the summer holidays with his dad in a tiny village in the North of England.

In the local church graveyard, he chances upon a boulder with a strange inscription – and meets Mia, who then tells him about the local superstition surrounding the stone.

“If you walk three times around the stone and say “I don’t believe in witches,” Meg will come after you.’

Alfie, in a reckless attempt to show his bravery, accepts the superstition as a challenge. He thinks the story is nonsense. But it soon becomes apparent that he’s just made the biggest mistake of his life…

Needing a break from Bristol, Alfie follows his Dad up North. It's not as relaxing as he'd hoped, as he soon catches the attention of a very vengeful and very dead witch.

I received a copy from Netgalley in exchange for an honest review.

This book follows Alfie, who's about 16 years old. Having nothing better to do, he reluctantly follows his dad to a job in a little village up North.

He soon meets Mia - a girl/potential love interest; and Meg - a witch murdered 300 years ago, who wants revenge on those that killed her.

The story was a little slow to start with, but had some very nice spooky moments, as Meg starts to stalk Alfie at night.

Alfie is sure that he isn't imagining the threats and dangers that wake him each night, so he enlists Mia and her Aunt Hannah (who is an expert in local occult & mythology), to help him get rid of the witch as soon as possible.

Some of the myths, and the history woven around Meg and Lord Blackwood was really interesting and creative. I liked how there was an echo between the pregnancies of 1700's and modern times, and how women still don't seem to have the monopoly on what happens to their own body. I thought this was handled in a very mature manner by the characters.

Despite glimpses of maturity from the characters, I felt that the book had a much younger vibe. I was surprised that Alfie was sixteen-ish, as he did come across younger for quite a bit of the book.

I didn't feel like this book committed to anything.

Alfie kinda doesn't want to be in Woodplumton, but goes along for the ride. He kinda likes his dad enough to make the trip, but the relationship between them was just flat.

Alfie kinda likes Mia, but can't work out whether he likes her, or likes-her-likes-her. Then suddenly there's kisses with all the heat of a cold dead fish.

And it's not just Alfie - Meg is suitably creepy to start with, then she's just kinda scary. She wants blood and revenge, but kinda settles for turning any milk in her vicinity sour.

I thought some of the characters flip-flopped on their stance about the witch, which was frustrating.

After being the person to warn Alfie and tell him about the superstition, Mia then doesn't believe he's actually being haunted by a witch. Then she does, then she doesn't.

Aunt Hannah - despite profusely explaining that she didn't think Alfie was crazy, and that logically Meg must exist; later says that it's probably all a figment of his imagination.

Meg also went from homicidal spectre, who wanted to kill the whole village; to a petty person who hates dairy; to someone whose only goal was finding the grave of her lost son. It was like a switch flipped, or that she'd never threatened the villagers.

The story ends solidly enough, but not everything is tied up. I'm guessing this may get turned into a series.

Overall, there were some promising moments, and I was intrigued enough to find out how it ended; but many of the elements were too flat.