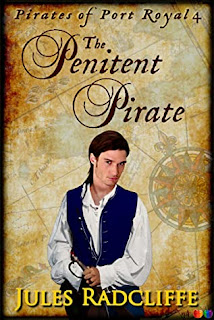 After peaceful months ashore strengthening their new union, Perry and Quinn are ready to return to the life they love best--roving with the buccaneer ship Audacious. Quinn is still haunted by his torture in a Spanish dungeon, and Perry hopes being back at sea will restore his matelot to his old self.

In Port Royal, they are swept into intrigues--the worthies of Jamaica are conspiring against the buccaneers, a baby is found on their doorstep, and a mysterious gentleman has a secret he will kill to preserve.

Just when Perry and Quinn hope to sail and leave it all behind, Quinn is asked to become the sailing master of Night Hawk, captained by the dashing Raphe Ashburn, his former lover. Charming, aristocratic, and witty, Captain Ashburn is everything Perry wishes he could be. But Night Hawk is a valuable ally, so Perry convinces Quinn to go.

All goes well until Perry is taken by an old enemy. He is certain he will never see his matelot again, for Quinn is not a man to brook deceit or infidelity from a lover. And Captain Ashburn is waiting in the wings to pick up their old affair.

When everything in their path seems intent on keeping them apart, will Perry and Quinn find their way back to each other?

Quinn is recovered enough from his time in Monte Gris, and it's time to return to sea with his matelot Perry. But the Brethren are about to be betrayed...

This book picks up a couple of months after Pirate Master (Pirate of Port Royal #3).

Quinn is slowly recovering from the torture he suffered in monte Gris, but luckily his matelot is very kind and understanding, offering him quiet support, as they enjoy life on shore.

Peace cannot last, and things are thrown into chaos when Quinn's ex-lover Raphe appears, and demands that Quinn join his crew as Sailing Master, to solidify the alliance between him and the Audacious crew.

Going against pirate convention, Perry will not be sailing with his matelot, as he's needed on the Audacious to support his captain.

Perry's past also comes back to haunt him, as the Navy are not through with him, and will go to any length to gain his skill and obedience.

This was another fun adventure with Quinn and Perry. Their relationship continues to be very hot, but is also very sweet and sincere. I loved reading about them, as their relationship becomes an established thing, and thoughts of the future. Perry was very cute when a baby is abandoned on their doorstep - you can tell where this is going to lead, but it was enjoyable following them as they try and find the little one a home.

The sweetness is well-balanced against the adventurous nature of the pirates, as they head out to claim prizes on the sea.

There is also the intrigue of who they can trust, even amongst the Brethren.

One of the things I've always enjoyed in this series is how the author folds in real historical events. They've taken a very tumultuous time in our history, when loyalties to Kings and various people of power, and no longer steadfast. It is fascinating to see how it affects the pirates.

Although this finishes reasonably tidily, there's still a lot of open questions, so I'm guessing there will be a fifth book in the series.