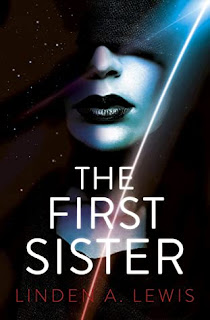 by Linden A. Lewis

Combining the social commentary of The Handmaid’s Tale with the white-knuckled thrills of Red Rising, this epic space opera follows a comfort woman as she claims her agency, a soldier questioning his allegiances, and a non-binary hero out to save the solar system.

First Sister has no name and no voice. As a priestess of the Sisterhood, she travels the stars alongside the soldiers of Earth and Mars—the same ones who own the rights to her body and soul. When her former captain abandons her, First Sister’s hopes for freedom are dashed when she is forced to stay on her ship with no friends, no power, and a new captain—Saito Ren—whom she knows nothing about. She is commanded to spy on Captain Ren by the Sisterhood, but soon discovers that working for the war effort is so much harder to do when you’re falling in love.

Lito val Lucius climbed his way out of the slums to become an elite soldier of Venus, but was defeated in combat by none other than Saito Ren, resulting in the disappearance of his partner, Hiro. When Lito learns that Hiro is both alive and now a traitor to the cause, he now has a shot at redemption: track down and kill his former partner. But when he discovers recordings that Hiro secretly made, Lito’s own allegiances are put to the test. Ultimately, he must decide between following orders and following his heart.

A stunning and sweeping debut novel that explores the power of technology, colonization, race, and gender, The First Sister is perfect for fans of James S.A. Corey, Chuck Wendig, and Margaret Atwood.

The Geans, Icarii and Asters are pushing closer to war. Lito has to track down his old partner, and bring them to justice; and the First Sister will reveal the truth of her sect.

First Sister is one of the bright stars in a religious group, whose duty it is to listen to confessions and prayers of Gean soldiers, and to purge the lust from them, so they are not distracted in battle.

The priestess was taken from an orphanage when she was younger, had her voice removed (so soldiers can trust their confidentiality), and had to satisfy any of the soldiers who visit her, pretending that she welcomes the attention. Internally she is screaming, and looking for any respite. She won the favour of her previous captain, which meant she no longer had to service the crew - that task is left to the other sisters; but when he retires and leaves her behind, First Sister has to find a new haven.

Lito val Lucius is from a poor family, and has had to fight and scrape for his place as a famed duelist. He knows that he's always just one mis-step away from returning to the slums, with his dear sister in tow.

He is brought in on a special mission: his ex-partner Hiro appears to betray the Icarii, and it's up to Lito to track them down and kill them.

I love the diverse rep in this book, the characters are confident in who they are.

I found it incredibly positive, that the worlds already accept people as equals, regardless of their gender/non-binary/sexuality.

I really enjoyed Hiro's little narrations, as you learn more about them and the connection they treasure with Lito.

The plot is good, and doesn't get too bogged down in constant romance.

There's a revolution brewing, as Asters are fed up with their place, being lesser citizens, and the victims of scientific experiments. They are not welcome amongst the Icarii or the Geans; and it will take some powerful, sympathetic allies from each world to create a positive future.

But I got the feeling that the author wasn't sure what this book was about. We get a good character piece from Hiro. We get the budding romance between First Sister and Saito Ren. Both of these I thought were the strongest bits, but not enough to carry the book.

Likewise, the rebellion and the intergalactic conflicts weren't enough.

For the first 40% I had no clear idea what Geans and Icarii are, except that they all originated from Earth and are vaguely "enemies". They're all at war, and have been for a century or so.

It never felt like they were at war, and the background it is again kept very vague.

The First Sister finds the Sisterhood an atrocious order that steals young girls and forces them into glorified prostitution. As a reader, I can sympathise with her. But then... the Second Sister is happy with her calling?

I thought this could be explored more. Throughout the book, you never get a sense of what the other sisters are thinking or feeling towards their Sisterhood. First Sister spends so much of her time avoiding them, so she can't be implicated in any treason or punishment.

Overall, despite its subject matter, I would class this as a light read, with a sci-fi flavour. It has some interesting ideas, and doesn't get bogged down in the details.