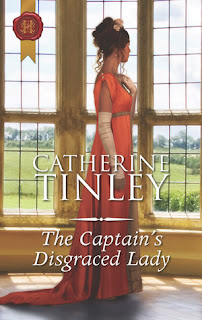 Synopsis
Who is Captain Harry Fanton?

When Juliana Milford first encounters Captain Harry Fanton, she finds him arrogant and rude. There’s no way she’ll fall for his dazzling smile! Her visit to Chadcombe House was always going to prompt questions over her scandalous family, so she’s touched when Harry defends her reputation. She’s discovering there’s more to Harry than she’d first thought…

A man so plagued by the demons of war, he’s sworn he’ll never marry, no matter how tempted…

Review
Juliana has been brought up a proper young lady, but her schooling in Europe never managed to remove her stubborn streak. Nor did it prepare her for the insufferable flirt, Captain Fanton.

Juliana has travelled to England for the first time, to visit her newly-married friend, Charlotte. Accompanying her is her mother, who finds the whole ordeal very taking on her health. Whereas Juliana looks forward to the season in London, and a bevy of new acquaintances, her mother is increasingly fraught with worry.

Captain Henry Fanton is in England, waiting for Napoleon to make his move and re-start the war. He has the outward appearance of a competent soldier, and a competent flirt. He is confident and charming, and excels at finding adoring women, and pushing them aside as easily.

I really enjoyed this book, a lot more than I thought I would at the beginning.
I was nearly put off by Juliana's "stubborn" character. Sure, I like women to be stubborn, opinionated, intelligent and independent. But in that opening scene, all I could think was "rude".
There's a fine line, and Juliana had gone completely over it.
She was a complete bitch to Henry when they first met, putting the needs of herself and her mother above all others, and treating him like shit. She was a stroppy little madam, demanding she got her own way.

Luckily, the rest of the book she acts like a normal, well-mannered human being.
Which is good.
I really liked her interactions with the rest of the cast. She is a doting daughter to a mother who proves very frustrating, refusing to divulge any details of Juliana's family.
She is very close to her friend, Charlotte, and they seem to balance each other out.
And of course... Henry. Despite disliking him for his womanising and shallowness, which everyone else thinks is endearing; Juliana starts to read more into his actions. She can see how it's an act, a part to play; and that perhaps the smiles directed to her are more sincere...

The plot supports the romance well. There is the mystery of who Juliana's father really is, and how society will treat her, once rumours start to spread that she is illegitimate.
I guessed where this was going fairly early on, with the introduction of some certain characters, but I still enjoyed every step of it!