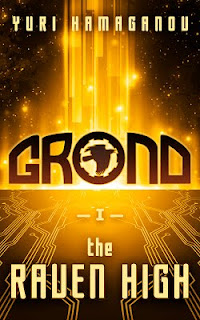 Synopsis
In the year 2086, Earth is exhausted. The seas have been emptied, the bedrock and soil stripped of their resources, and the superheated atmosphere churns with terrible storms. Those who can afford to do so live in the limbo of virtual reality, and the billions who suffer in poverty have no work, no clean water, and no security from the chaos.

The only hope for those trapped on a dying Earth are the Changed—the seven bioengineered post-humans who work in their separate manufacturing facilities orbiting high above the planet. Raised from birth for their work and fully matured at ten years old, their genius provides the nanomaterials that have begun to cleanse Earth of the pollutants that have wiped out almost the entire ecosphere.

But for Olga Voronov, youngest of the Changed, the isolation and endless toil are not the greatest of her challenges. Down on Earth there are those who resent and fear her talents—and would prefer that humanity not be given the second chance that only she could make possible …

Review
Olga has only ever known her solitary life on her space station. It is no secret that she is a highly-invested-in cog in the Corporation's money-making machine. She has been raised since birth to do her duty, and never answer the bigger picture.

This was an odd one, not really what I was expecting; but after reading that this was Hamaganov's creation when he was 12 years old, it starts to make a bit more sense.

First of all, I will say that I had an unedited version (or at least, I hope I did). There's a lot of missing words, and the syntax is overly formal and awkward; I wouldn't be surprised if English wasn't the author's primary language.

The first chunk of the story surprised me with a lot of very detailed descriptions and explanations. It's less of a sci-fi adventure, or a multi-layered dystopian; instead, we were given a detailed training instruction for a six-year-old girl. We learn about every clip and button and neural interface, etc.
It was just too much, and too heavy for me, and I struggled to get through the first section.
This went on for at least 40% of the book, and then something strange happened.

I started to like Olga, Arina and Misha. There was something really cute about their family-esque dynamic. I started to forget that this was the middle of a sci-fi story, and I just wanted to follow what happens to Olga, as her little world is inevitably corrupted by outside influence.

There is a dystopian Earth in the background, that requires Olga to help in the production of clean water, which is the resource the damaged world is severely lacking. There are also past conflicts floating about, with promises of galactic battles, and wars with the androids that want freedom from humans.
This has very little bearing on the story. This is all about Olga, as she passes through time, starting at six years old, and finishing with her mature twelve-year-old self.
Despite the fact that her rate of maturity is doubled, and her increased intelligence, so she can be useful with a shorter period of training; there is still a youthful innocence about her. Like a child, she is concerned mainly with the small world of her nanny, Arina; her Corporation contact Uncle Misha; and the training, always the training.
We only glimpse the wider existence and conflict, when Olga turns her young eyes that way.

Author Bio
Yuri Hamaganov lives in Moscow. He created the GROND series as a present for himself when he was twelve years old. This was the story he had always dreamed of exploring, and when he realized that nobody had written it for him, he set out to do it himself.

…Paris. December. But this was not the city whose streets Olga loved to prowl on a motorcycle in her early childhood.

Olga and Arina Rodionovna slowly walked along the central streets. The simulator reproduced the thick snowfall and cold wind with exceptional precision. Their fashionable leather boots squished over the slush as they walked down trash-filled sidewalks and past once-fashionable shops whose windows were covered with steel shields and twined with concertina wire. There were no trees left—they had long since been cut down for firewood. Only one out of every ten street lamps operated since electricity was so costly. Hydrogen powered vehicles hummed down the street. A large column of smoke rose into the sky from a few blocks away. Shots were heard as rioters and the army traded gunfire. A huge line of people stood in front of a government office. Judging by their looks, they had spent many hours in the cold.

“Nowadays you will see a similar picture in all the major cities,” Arina said. “The situation here is still rather calm. The army still has control of the city center, though they steer clear of the outskirts if they can help it.”

“Are all those people unemployed?”

“Yes, and they are seeking food rations. Most of them have never had a permanent occupation. And never will.”

Olga shrugged. It wasn’t her problem.

There was too little work left for Earth’s huge population. Hardly ten percent of them were employed. The space industry with its high efficiency had ruthlessly destroyed most enterprises on Earth. The farming industry had also changed drastically over the pat fifty years, with fully automatic facilities needing almost no personnel.

Finally, there were Olga and other representatives of the Changed from her generation. The symbiosis of the artificial intellect and nanomachines has given them virtually unlimited capabilities. And so the billions of ordinary people had become useless for anything except standing in lines for free rations.

Olga had never felt sorry about that, taking this state of things as a matter of course. Since her early childhood she understood that you can’t stand in the way of progress or progress will crush you. These people couldn’t compete with her, and so in compliance with the omnipotent laws of evolution, they were doomed to defeat and squalor. The sole thing that worried Olga was that sooner or later she too could be replaced. This option was not unlikely either.

“We observe the classical vicious circle,” Arina said. “No work, no money. No money, no trade. No trade, no work. Nowadays to live on Earth, one must be either very rich or very poor. All others have gone to the orbit.”

The sirens howled out their warnings of the commencement of the curfew and the closure of borders between the districts. Olga shuddered

as a gust of cold wind hurled wet snow into her face. Even as the rest of the world baked, Europe had frozen with the cessation of Gulf Stream current.

“Well, Raven, have you decided not to return to Earth when your contract expires?”

Blog tour: Save the World

How You Can Save the World and Enter to Win a $175 Prize Pack! “If you like action-packed adventure books that will keep you reading well into the wee hours, I would recommend  The Secret of the Lost Pharaoh .” –Jennly Reads To celebrate the release of my second action adventure The Secret of the Lost Pharaoh , I’m offering up my largest prize pack to date! But, first let me tell you about the book… When it came to writing The Secret of the Lost Pharaoh , I wanted to create a story in the same vein as City of Gold , maintaining what reviewers described as “a fast-paced action adventure” that is “akin to an Indiana Jones story set in modern times.” So in this second installment, archaeologist and adventurer Matthew Connor and his two closest friends set off for Egypt to save the world. I even splashed in a bit of the police action my readers know and love. “Why does the world need saving?” you may ask, possibly skeptical. Well, an old friend and colleague of Matthew’s has
Read more

Blog Tour ~ Excalibar Investigations Complete Series Box Set  Author: Tiffany Shand Genre: Paranormal/Urban Fantasy/Romance Dates: 11th - 15th of September Hosted by: Ultimate Fantasy Book Tours Blurb: The complete series Cate McCray is no ordinary witch. Prophesied to be the one to destroy the Covenant, an age-old organisation who seeks to enslave all Magickind, the race is on for them to kill her before she receives immortality. But before receiving the phenomenal power that comes with it, she must first survive the ascension and the only person who can help her is her elemental partner, Jason Talbot. But when the time comes, her forbidden love for Jason threatens to destroy them both. As leader of Excalibar, an elite team of Enforcers, they work to infiltrate the Covenant leading Cate into life-threatening situations. Can she outwit them before it’s too late?
Read more