The Rite of Wands 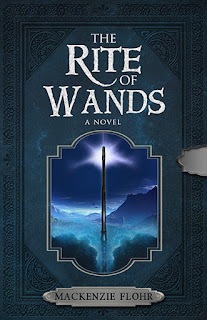 The Rite of Wands
by Mackenzie Flohr
1 out of 5
Synopsis
One boy…one Rite… And a world of deadly secrets that could change the course of history—forever.
And so begins the tale of Mierta McKinnon. When a horrible fate reveals itself during his Rite of Wands ceremony, he must find a way to change not only his destiny but also the land of Iverna’s.
Forbidden from revealing the future he foresees to anyone, he is granted a wand and his magical powers, but still must master the realm of magic in order to save himself and those he loves.
But Mierta is not the only one with secrets…especially when it’s impossible to know who to trust.
Review
Mierta must claim his magic, to save his people from and awful fate. Orlynd is thrown into a dangerous court, and has to work out who to trust.
I received a free copy in exchange for an honest review.
When Mierta turns twelve, he is able to take part in the Rite of Wands, a mysterious ceremony that tests if he is worthy of wielding magic.
During the test, Mierta sees his past, his present, and a potential future where he dies in a plague along with everybody else.
Fueled by the knowledge of his potential fate, Mierta throws himself into his training, going to any lengths to find a cure.
Orlynd is 14 years old when his father, the King's old advisor, is exiled.
Keen for the young warlock to do his part, his father sees that Orlynd stays at court and takes his place as the new advisor.
Orlynd is wonderfully naive, as he is thrust into a society he doesn't understand. He has to contend with a morally-questionable prince, and his ambitiously-questionable betrothed. He sees danger everywhere he looks, but doesn't understand the courtly-nuances of when not to tell the truth.
I follow the author on social media and I've had this book on my radar for a long time, so I was excited to get a review copy during a recent blog tour.
I was a little apprehensive that, with the age of the characters this might be a little young for my tastes. But The Rite of Wands is a solid YA fantasy. Although they are young, the characters are quite mature, and this follows them as they come of age.
Unfortunately, a lot of the book didn't work for me.
Despite there being a detailed map at the beginning, and a detailed glossary of terms, I never felt like I understood the world in which the story was based. There was no explanation of the different countries, or the magic system. It hinted that warlocks only existed in Mierta's country, but didn't categorically say they weren't elsewhere. It also left a big blank over what society was like for those who didn't take the Rite of Wands, and people born from non-magic families was just blurry.
It felt like Flohr was so familiar with her world, she forgot about us newcomers.
The narrative got to off to a rocky start.
Mierta is in the middle of a secret rite, with no idea what's going on. We follow him as first he thinks he's dying, then failing the test, then getting visions, then thinks he's failing again.
Jumping through the visions is a tool to build Mierta's background, and establish his motivation.
The narrative is shared with Orlynd, whose exiled father breaks into the king's quarters and thrusts Orlynd into the service of the king. For reasons.
You don't know why Orlynd's father is exiled, or why he still gets an audience with the king, or what he wants from Orlynd.
The king - for reasons - takes on the magically-untrained-country-bumpkin-son of his newest enemy as an advisor, then doesn't listen to his warnings.
As the story progresses, I found the narrative very "talky".
Mierta in particular talked to himself, explaining to the reader what his thoughts and motivations were. I found this form of telling very off-putting.
I was not a fan of Orlynd's speech. I understand that he's a country lad, but he's the son of a great lord and lady - I can't believe his accent would be that broad.
No one else speaks like this, and it was near impossible to follow what he was saying, which made it hard to stay invested. There is a translation guide at the front, but it's not practical to try jumping back to it at every sentence.
Like many fantasy worlds, his speech seems based on British. As a proud Yorkshirewoman with family in Scotland, I ended up cringing at a lot of his speech. I know this is a fantasy world, and the author is free to take as many liberties as she likes; but it was a little too close to reality, and it didn't mean what you think it meant.
Overall, this was a great idea, but the book wasn't for me.
Goodreads
Amazon
adventure fantasy reviews witches YA