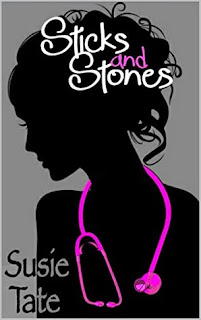 Synopsis
For Lou it was always Dylan.
She loved him from the moment they first met across a cadaver in the dissection room at medical school. The most gorgeous man she’d ever laid eyes on, with more Welsh charm than you could shake a stick at; she was a goner.

But Lou, despite her beauty, was just too extrovert to interest Dylan, who was convinced that a quiet, shy girl, like Lou’s best friend Frankie, was much more his style.

‘Have at it mate but I’ve got two words for you: high maintenance.’
‘Don’t think I’d mind putting in the hard yards maintaining that piece of arse,’ one of Dylan’s more disgusting rugby mates replied.
‘Well good luck to you,’ Dylan returned, looking completely relaxed now that they were discussing Lou and not his precious Frankie. ‘I like mine heavy on the sweet and light on the ball-breaking bitch, but each to his own.’

After overhearing that exchange, Lou buries her pain and pines for him in private, but she can't give up their friendship. One night, eleven years later, she finally gets what she has been longing for, but the next morning realizes he was too drunk to even remember.

For Dylan it was always anyone but Lou.
A born surgeon, Dylan resents having to down his orthopaedic power tools for a six-month spell in Elderly Care. He thought that at least working with Lou would make his skiving easier; after all she’s always helped him out before. And so what if he’s been having these weird dreams about her since he woke up in her flat? It’s not like he’d ever actually go there.

So when he mistakenly believes that she’s put his career in jeopardy he loses control and his vicious insults, publicly made, cut Lou to the bone. It’s only after he loses Lou’s warm smiles, dry wit, boundless energy and outrageous banter from his life that he realizes the extent of his stupidity.

Maybe sticks and stones can break bones, and that’s something Dylan’s surgical skills can deal with. But when it’s a heart he’s broken…


Review
Lou and Dylan have been best friends for years, but when a drunken night ends with them in bed together, they start to want more.

I downloaded this book when it was free a couple of months ago.
I didn't realise at the time that this was part of a series, but it can be read as a stand-alone.
I was looking forward to the intelligent and determined young doctors (who doesn't love Greys Anatomy?), and the added bonus of it having a Welsh MC (I lived in Wales for years, and I'm very fond of it).

I thought it started off promisingly enough.
Lou has been in love with Dylan for years, and has gotten very good at hiding it behind her loud personality, and heavy workload.
Dylan has spent years pining after Lou's best friend, but slowly starts to realise that it is Lou that he actually enjoys spending time with; would go to any length to protect.
Of course, they both deny their feelings, and Sticks and Stones follows the time ensuing.

The good?
I liked the medical sides of things. It's very knowledgeable, and makes an interesting background, without ever feeling like a lecture.
There's no insta-love to be seen, as this has been a friendship for the past ten years, or so. It all builds up gradually, and takes a few realistic knocks along the way.

The not-so-good?
((warning, stop reading now if you are offended by strong language))
The book is littered with English & Welsh swearing, so I'm confident to say that Dylan is an absolute dick, or a twll tin if you want to be in keeping with the book.
I know there's gt to be conflict between the two main charries, otherwise this would be a really short book; but this was ridiculous. He's such a selfish little *InsertSwearingHere*. Seriously, he is horrible to Lou sometimes, and wrecks her career, when all she was trying to do was help him.
They're best friends, and he knows her weaknesses, and exactly what insults will hurt most.
At work, he is lazy, blind to everything he doesn't give a fuck about; and couldn't care less for the consequences. If he's rude to patients, so be it.
OK, there were some very brief moments when he wasn't a complete fucking shithead, but I can't even remotely consider him a romantic lead.

I also didn't like how the story jumped along the timeline.
If it wasn't jumping to four years ago; twelve years ago; eight years ago; the "present" timeline kept skipping along by weeks and months. Fair enough, it wanted to spread and cover some major events, like Lou's 30th birthday, and Frankie's wedding, which were highlights of the story. But it was spread too thin. Something would happen, then jump ahead without giving the characters chance to react. As the story charged ahead, I found that I just didn't care.

This book is described as a romantic comedy, and I found it lacking on both counts.
I couldn't get over the arse that is Dylan; or the strife that Lou has to overcome, to find this romantic.
And the only thing I found funny was the little boy who pops up briefly in a couple of chapters. The rest must have been a very dark humour indeed.

I might read the first book in this series, out of curiosity for Frankie's story; but I won't be in a rush.