I'm busy playing catch-up with my reviews at the moment, so I thought I would save some time (and assuage my lazy nature) by posting the reviews of the second and third part of Linsey Hall's Dragon Gift series. 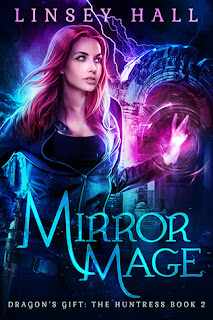 Synopsis
Cass Clereaux likes her job. It’s simple—steal the magic, don’t get killed. FireSouls like her are perfect for magic treasure hunting. Their dragon soul helps them find treasure, their wicked powers help them steal it. But there’s a big freaking downside—FireSouls are hunted. If either of the magical governments figures out what she is, she can kiss her life goodbye.

When the Alpha Council comes to her with a special job, it’s a no-brainer to turn it down, no matter how much money they’re offering. Shifters who can sniff out her weird magic are the last supernaturals she needs to be around. Worse? They have a history of hunting FireSouls. But when Cass learns that a little girl’s life is at stake and Cass is her last hope, she doesn’t have a choice.

With her sisters and Aidan Merrick at her back, she’s got a chance at saving the girl and keeping her deadly secret—until she learns there’s far more to this kidnapping than meets the eye. It’s far too similar to what happened to her as a child, and everything new that she learns scares her even more.

Review
Cass is starting to come to terms with what she is - a FireSoul - a type of magica that is feared and punished for merely existing. Just as she starts to access her powers, Cass is called to the Shifter council to help rescue some stolen treasure.

I like these books.
Hall has built a nice fantasy-alternative to our world, where shifters and magica mostly live in special communities that repel humans. There are good guys, black magic and demons, and lovely grey bits in between.
They're light, fun, and just so entertaining that I can forgive all the cheesy moments.
You get to find out more about the shifters, as Cass and Adrian travel to their base in Scotland. The time with the Shifters' council is brief, but you get the idea that they could be strong allies, and equally strong enemies.
There is the re-emphasis that FireSouls are hated by all. It is easy to believe the blinkered view that all FireSouls are evil when, well, they can kill to take another magica's powers and most of them do become obsessed with power.

You get to find out the truth about Adrian's background, and what his... not exactly dark, but emotional little secret is.
Other than that, Adrian remains perfect. A little too perfect, if I'm honest.
Sure, with his imposing frame and ability to turn into a huge griffin, he's a scary guy for people that don't know him. But we know him now. He's handsome, smart, loaded, caring, attentive, the strongest shifter, powerful magic-user, etc, etc.
To be honest, I'm worried that he might get a little bland further into this series. Sure, he will continue to be amazing and Cass is clearly falling for him; but we've had two books of amazing now.

Cass continues to be fairly awesome. I like her. She is very human, and can allow her emotions to overrule her logic at times. She isn't afraid of putting herself in danger, especially if it is to save her friends. She's never afraid of the fight.

You get to learn more about the Monster and Cass's forgotten past. The Monster becomes something more real and more dangerous in this second book. After building Cass up to be a very strong, independent woman, it is very effective how her childhood fear rears its head when the Monster steps into the room.

There aren't any major twists in the plot, but it all runs along smoothly and I really enjoyed the adventure. I am definitely cracking on with the rest of the series! 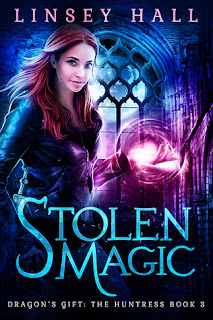 Synopsis
Being a FireSoul has its perks. Cass Clereaux can find any type of magical treasure—or steal any type of magical power. She’ll pick hunting treasure any day because she doesn’t have to kill for it, but that doesn’t mean she hasn’t stolen powers. She needs them to stay alive. Because a fight to the death is the least of what she can expect if other supernaturals find out what she is, she’s become an expert at laying low.

When her friend is sucked into a magical portal, she’s the only one with the power to help him. But what she uncovers is a danger greater than she’d ever imagined—and linked to her past in a way she’d never expect. Worse, the portal puts her whole town at risk. As the threat grows, she must confront her fear of losing control of her new powers, or lose any hope of saving hundreds of lives.

Review
The secret that Cass is a FireSoul is slowly spreading, and she knows that she has to avoid the magic council at all costs. But that is put on hold as her home city is threatened with destruction, she has to embrace her powers and worry about the consequences later.

I received a free copy in exchange for an honest review.
This is the third part of the Dragon's Gift series - I'm not sure how many books Hall has planned for it, but this one felt like it was building up towards the finale (the author has since informed me that she currently plans 5+ books for Cass, then a book each for Del & Nix).

The Monster features a lot more prominently in this book, as he clearly has a hand in trying to steal a certain artefact from the museum. You also get to see something of where he has been hiding; and there is quite the exciting chase through Switzerland.
It is clear he knows who Cass is now, whereas before he just thought he was chasing a random FireSoul. He wants to get her back, and you wonder whether it's a desire to prove he can't be beaten or escaped; or if he knows something about Cass' past that we can only guess at.

Cass and her friends have a limited time to stop the Monster from gaining a powerful relic; and to stop a spell from backfiring and taking out the city.
There is the same fun nature and humour in this book as the previous stories, but there's a undercurrent of a serious nature. The threats and dangers are much more real, as well as the implications of being a FireSoul. To not have control over this powerful thing, to feel the addictive pull, insisting that you should take more power.

As with the rest of the series, the plot is easy to follow and doesn't come with any shocking moments.
Stolen Magic is another (crazy) step into this imaginative world. I liked the creativeness, but I think it could be marmite for many readers - they will love it or hate it. There is a lot of time spent on a separate plateau that felt a lot like falling down the rabbit hole and into Wonderland.
The scenes are odd, out-of-place, and designed to test the characters both physically and mentally.
I wasn't entirely convinced at how they managed to get into and out of certain situations, but I still enjoyed the ride.

Bring on the next one!