The Hero's Lot & A Draw of Kings 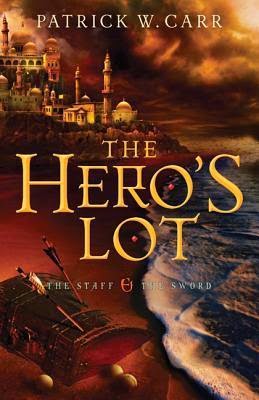 Synopsis
Riveting Sequel from Christian Fantasy's Most Talented New Voice When Sarin Valon, the corrupt secondus of the conclave, flees Erinon and the kingdom, Errol Stone believes his troubles have at last ended. But other forces bent on the destruction of the kingdom remain and conspire to accuse Errol and his friends of a conspiracy to usurp the throne. In a bid to keep the three of them from the axe, Archbenefice Canon sends Martin and Luis to Errol's home village, Callowford, to discover what makes him so important to the kingdom. But Errol is also accused of consorting with spirits. Convicted, his punishment is a journey to the enemy kingdom of Merakh, where he must find Sarin Valon, and kill him. To enforce their sentence, Errol is placed under a compulsion, and he is driven to accomplish his task or die resisting. 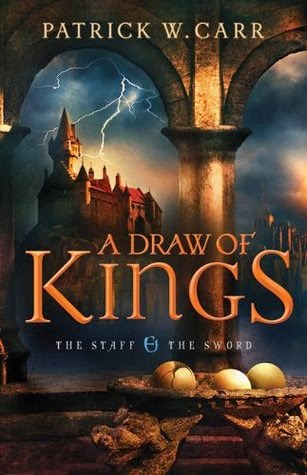 Synopsis
Their journey to Merakh should have made Errol and his companions heroes of the realm. Instead, much is changed on their return. In the wake of the king’s death, Duke Weir is ruling the country–and his intentions are to marry Adora to bring an heir.With Errol and the others imprisoned and the identity of the rightful heir to the throne still hidden in secrecy, Illustra is on the verge of civil war–and at growing risk from the armies of Merakh and Morgol.A dangerous mission to free Errol succeeds, but the dangers facing the kingdom are mounting with every passing moment. The barrier has fallen, ferals are swarming toward the land, and their enemies draw near. Will the revelation of Illustra’s next true king come in time or will all be lost?


Review
Before I start - it says "Christian Fiction", and promotes it as such.  Ignore that bollocks, this is a cracking series regardless of genre.  Plus, it is not something I would even class as Christian Fiction.  Yes, the church plays a major part, but religion drives this story only as much as it does in LOTR, Narnia, or any other great series.

So, here's a first - a double review!
I have to confess that I enjoyed the first book Cast of Stones so much I decided to keep the rest of the series as a treat when I finished writing The Shadow Falls.  Five months and a lot of stress later, my own book was published, and I immediately went and bought The Hero's Lot... which was read within a week and I straight away got the third part.

The Hero's Lot picks up where the Cast of Stones left off.  Despite the many obstacles, Errol and the other Callowford men are at the capital.  They must prepare against war that threatens the borders, as well as fighting the internal politics and betrayals in church and court.
Errol forms a band of unlikely heroes to venture into Merakh to hunt down the escaped Sarin Valon.

This book was worth the wait.
We learn more of the threats to both Erinon and Errol.  The Merakhi have sold their souls for the chance to overrun the Kingdom, their enemy for generations.  There had been hints of them in the first book, the ferals and those possessed by Mallus.
It was great to see Errol assemble some of the influential characters that made the first book so good.  Ru and Rokha are great additions, it wouldn't be the same without them.
We see more of Princess Adora, who wants to prove that she is more than a damsel in distress and a pretty face.  The interactions between her and Rokha were some of my favourite parts of the book.
Then there are the revelations concerning Errol and Liam; and Errol's father (well that one ruined my theory - shocking!).

A Draw of Kings had a lot to live up to.  The Kingdom is on the brink of being overrun by enemies from all sides; the long-standing authority of the church is in question; and their heroes are again sent into danger.
I'm really struggling to work out what to say, so as not to spoil anything!

I am disappointed.
I followed a friend's advice to mull over this review and not be too rash in my judgement.  I am still disappointed, but I've decided that the book is worth 4 stars.
It is good.  If I had to judge this book on its own merit, I would rate it highly.
There is excitement and danger.  Love and sacrifice.  It is suitably epic.

But as part of the series, it failed to inspire me the way the first book did.
It feels like it's missing a lot of Errol's naive charm and humour.  Fair enough, he's a Captain of the watch now, and the whole of the Kingdom is looking up to him as a hero.  He knows he might have to make the ultimate sacrifice, but is more concerned with the men that would willingly die for him.
It seems like Carr realises this and tries to make up for it with the introduction of Owen, whose sole purpose is to allow redemption for Martin and Cruk's previous mistakes in ignoring Errol's struggles in Callowford.

Aside from that, I felt that the whole book was all dark, no light.  Yes, there was danger.  Followed by danger and insurmountable odds.  Switching to another character's dire, inescapable position.  Concluding with more danger.  Oh, and did I mention that it was desperate and not winnable?
It got a bit tiring and I was glad to get to the end.  Which isn't how I wanted to feel after being completely swept away by The Cast of Stones.

If I am honest, I would recommend the first two parts of the trilogy, because they are amazing.  The third book is simply necessary to finish the story.

Goodreads links:
The Hero's Lot
A Draw of Kings

Amazon.co.uk:
The Hero's Lot
A Draw of Kings
adventure fantasy