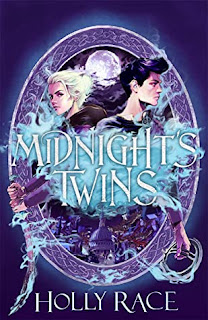 5 out of 5
Synopsis
The first novel in a lyrical, endlessly inventive urban fantasy trilogy from debut author Holly Race.
Fifteen-year-old Londoner Fern is about to uncover a place that she could not have imagined in all her wildest dreams. Annwn is the dream mirror of our world, a place where Dreamers walk in their slumber, their dreams playing out all around them. An enchanted, mysterious place that feeds our own world - as without dreams, without a place where our imaginations and minds can be nourished, what kind of humans would we be?
But Annwn is a place as full of dangers as it is wonders: it is a place where dreams can kill you. Annwn and its Dreamers are protected by an ancient order known as the Knights - and when Fern's hated twin Ollie is chosen to join their ranks, Fern will have to do whatever she can to prove she is one of them too.
But the world Fern discovers in Annwn, in this dream mirror of her London, is a fragile one, threatened by vicious nightmares. Nightmares that are harder and harder for the Knights to defeat. Something dark is jeopardising the peace and stability of Annwn, something that must be rooted out at all costs. And gradually, Fern realises that the danger lurking inside our sleep is more insidious and terrifying than any nightmare. Because if you can influence someone's dreams, you can control their thoughts ...
Review
Fern was born an outsider, and has had a lifetime of torment. But when she learns that dreams are real, everything starts to change.
Fern is an outsider, even to her own family. Her mum died when she was a baby; her twin brother is part of the pack of local kids that bullies her; and that same brother has always been her dad's favourite; giving Fern no one to trust but herself.
Fern has always been bullied for having bright red eyes. From kids at school, to strangers on the tube, she's always been treated differently, because of something she can't help. It was made even worse, when her face was scarred when her bullies went too far.
When Fern turns 15, she discovers the world of Annwn, a place of dreams and imagination. Like her mother before her, she has the chance at becoming a knight, as there are nightmares, too.
Wow.
This story took a while to get into, because I found it tricky at first to see the ever-changing Annwn, with it's weird rules and creatures; and if I'm honest, I was a little unsettled at how close to home the relationship between Fern and her brother was.
But once it got going, this was fantastic.
The world of Annwn is built by generations of dreamers, who bring it to life in the strength of their memories; and it turn Annwn inspires them in their normal lives.
Not everything is as straight-forward as trainee-knight Fern is originally told. There's more than nightmares, and there's an insidious presence threatening both worlds.
I loved the plot and the fast-action, as Fern and the other knights have to uncover what this person is after, and why it is linked to the death of her mum, fifteen years ago.
The risks are real - anyone who dies in Annwn, dies in the real world. And this story, for all of its light moments and camaraderie, is bloody brutal. Hunger Games brutal.
The story was also deeper than I expected. The way it looks at mob behaviour, and how normal people can be stirred to violence by charismatic politicians. Or all the small little gestures and comments that make it clear that they don't trust anyone who looks different, because their dangerous belief has been encouraged by the wrong people.
No one is all good, or all bad.
I also liked Ollie's journey through this. In the real world, he's popular, good-looking, and people are always on his side.
When he becomes a knight of Annwn, it's the first time a group of people see his twin sister as his equal, and judge him for what he's done.
The hatred that has been festering between them for years finally has to be faced, if either of them will survive.
I very much enjoyed this one, and I'm looking forward to the next part of the series.
Goodreads
Amazon
adventure Contemporary Demons fantasy Intrigue Mystery NetGalley paranormal reviews urban fantasy witches YA