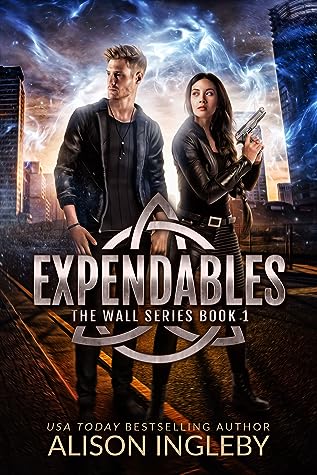 Aleesha is an Outsider. If the government find her they'll kill her. She survives each day by looking out for herself. And trusting no one.

Trey is an Insider. He never knew what the Outside was like until he finds himself hunted by his own people for an unknown crime he didn't commit.

Drawn together by forces outside of their control, Aleesha and Trey must learn to work together. It's not just their lives that are at stake. It's their country's future.

Set in a disturbingly realistic vision of a future London, this fast-paced dystopian thriller will appeal to fans of The Hunger Games, Divergent and The Maze Runner.

Review
Aleesha and Trey have had very different upbringings, but they are the only people who can cross the wall. They find themselves caught between conflicting gangs.

In a future where London is divided by a wall, Aleesha is an outsider. The main aim in life is survival, as food, water, and shelter are all in short supply. The Outside is ruled by the gangs, in a constantly-shifting fight for power. Everyone is out for themselves, and only the hard survive.
Aleesha is an illegal citizen (unchipped), and knows that the only person she can trust is herself.
She's one of the smartest people around, and has to rely on her wits to negotiate the gangs, and keep a steady supply of the drug that takes away her misery.

Darwin "Trey" is an Insider. He feels like the runt of his class, as he hasn't been given any genetic modifications, like the others his age. For no obvious reason, Trey finds himself on the run, being chased down the Metz. With a choice of death or enslavement on the farms, Trey escapes to the Outside. Once there, he learns the truth about how different London really is, and how blind he has been.

The story follows them as they come together and are forced to work for the mysterious chain.
They find the truth behind the Great flood and the creation of their dystopian society. They also find the truth of their own history, that has been hidden from them.

I liked this story. Aleesha is tough and resourceful, and a clear asset for the Chain and other dodgy organisations. She's determined not to be a pawn, and uses them for her own agenda. Despite her hard exterior, she is full of passion and emotion, that she won't let herself feel, because it's dangerous to show weakness.
Trey is a much weaker character. He has none of the genetic advancements of other Insiders (for a reason I won't say, because spoilers), so he is slow and weak compared to his peers. He doesn't belong with the Outsiders either, as he's had a soft upbringing, and he screams 'victim'. It's a miracle that he survives, and he has to rely on his allies. This soft boy wasn't an appealing character in the beginning, but he gets much stronger throughout.

The London that Ingleby has created is reminiscent of Hunger Games, with two very different existences pushed up against one another. I found her descriptions of Outside London very evocative, you understood the feeling of constant danger, the hunger and limitations at every turn.
I especially liked Trey's awakening, how it dawns on him how ignorant he was. That Insiders barely think about Outsiders, in their day-to-day life. And he has been brought up with the misconception that Outsiders are lazy, and in their predicament because they chose not to work.
It is a shock to the system when he realises that there aren't enough jobs to go around, and people aren't given the basic food, water and healthcare he takes for granted.

I really enjoyed this book, and look forward to the rest of the series.