The Sins of the Sire 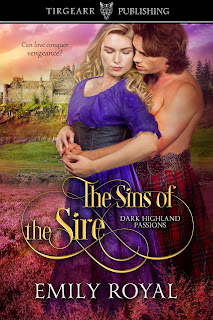 The Sins of the Sire

Synopsis
Two years ago, English noblewoman, Elyssia De Montford, risked her life to free the Highlander held prisoner by her sadistic fiancé. She cannot forget the man who first stirred her heart–a memory that burns anew when she finds herself once more on the road to Scotland.

Tavish MacLean has sworn vengeance. It’s been six years since his beloved sister was raped and murdered by an English lord, a tragedy which almost destroyed his family. On his deathbed, his father demanded retribution and Tavish pledged before his clan to enslave the lord’s daughter then send her back to her father, pregnant with a Scottish bastard. When he learns that she is travelling north, he seizes his opportunity and orders her abduction.

But when his men fling the prisoner before him, Tavish recognises Elyssia, the woman who once saved his life. Loyalty to his clan trumps the debt he owes her and he claims Elyssia as his captive. Though she’s one of the hated English, her willing body ignites passion in him at night, though she fights him at every turn during the day. As time passes, he questions his loyalty, finding himself increasingly enthralled by his fiery captive.

Treachery surrounds Clan MacLean. When long-buried secrets come to light, Tavish must risk his life and his clan, or all that he holds dear will be destroyed.

Review
Elyssia and Tavish save each other from a cruel man. Two years later, they are thrown together again by their warring families.

Elyssia is an English lady who escapes an engagement to a violent man, thanks to a handsome Highlander.
A couple of years later, she is being sent off to marry yet another cruel lord, when she is waylaid by a clan looking for revenge.

Tavish is the head of the MacLean clan. It is his duty to seek revenge on the family that was responsible for the rape and death of his beloved sister. It's a cruel twist of fate that Elyssia, the woman he has been dreaming about for years, has to come back into his life and bear the brunt of this "justice".

Let's get this out of the way - this book was rapey. Very rapey.
It reminded me of old-fashioned bodice rippers, with lots of dubious "romance".

Once the initial, uncomfortable scenes were out of the way, it made for an interesting read.
Tavish has to deal with the politics and expectations of his clan. He wants to be a good man, but is bound by duty, if he doesn't lead certain violent acts, he will lose the respect of his men.
He is conflicted, unable to love Elyssia, but unable to resist her.
Throughout the story, he is tested, and has the chance to do the right thing; but often fails.

Elyssia was a surprisingly strong character. Even though she wants happiness, she will dutifully wed where she is told. That being said, she has enough spirit to stand her ground, and not bow to her cruel fiance.
Elyssia is willing to put up with a lot, as long as she can protect her sister, Alice, who has seizures and learning difficulties. In their harsh world, many don't have the patience for Alice; but Elyssia always puts her happiness first.
Despite being a captive with clan MacLean, and despite all the abuse she has to suffer, Elyssia starts to feel useful. She learns to work in the kitchens and with the healer, and its quite sweet to see the simple purpose that starts to grow.

What follows for Elyssia and Alice is upsetting, and further proof that women had no say in their own lives.

All in all, this is not a romance, except in the most brutal and twisted sense.
As a historical drama, it does pack a punch.