Thrown to the Blue 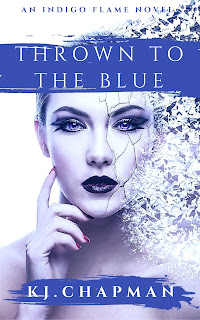 Thrown to the Blue

Synopsis
Foretellings have no place for goodness, only greatness. Princess Ezrahli is far from good, but she is a great woman in a conventional Kingdom, followed by whispers and scorn. However, across the waters is un-convention, magic, and fable. Her existence has been foretold in the battle against dark magic, and destiny shall weave itself into her life because darkness cannot be fought with goodness, only greatness.

Smuggling and sorcery leads to adventure, and adventure leads to destiny. Reed is a prince of the streets, but what he lacks in title, he makes up for in skill; a skill that sets him on a path already written in fate. Can he be more than what is expected? Can he enable greatness in another and survive the process?

Vengeance is a motivator, but it can never be your friend. In the end, it will ask for sacrifice, and only the great will pay the fare.

Review
Princess Ezrahli has grown up with vile rumours of her being a witch, only to find the rumours are true. Dragged into a foreign prophecy, Ezra has to deal with hidden enemies, unexpected allies, and finding her Prince along the way.

I received a free copy in exchange for an honest review.
Wow, this definitely starts with a bang. I don't care if you think this is a spoiler, I have to share. Ezra kills her father, the King. A very impressive and bloody opening chapter that firmly sets the tone for the rest of the book.

Afterwards, her beloved older brother has to establish himself as the new King, and Ezra has to face the truth that she is a witch.
I really liked that certain women were merely potential witches, and only received their powers when they are "thrown to the blue". This means they are thrown into a magical blue fire; which I thought was a really clever twist to the fact we used to burn witches.

After Ezra is awoken, the rest of the book continues as a solid 4-star adventure, as she and Reed grow closer together, and Ezra builds her understanding of the players in this foreign war. Queen Lyredith, the Indigos, and the Coven are all keen to claim Ezra. Nothing is black and white with any of these groups, they all want to use the prophecy to suit themselves, and there is always individual ambition.
There is a really lovely balance between friendships vs. morals; and enemies vs. common goals.

The final few chapters really help push this story up to 5 stars. I was very impressed, and although I had an inkling, it was still unpredictable.

The only thing I wasn't keen on was Reed's narrative. On the one hand, it was very easy to tell the two narratives apart; but all the 'is-nay's, 'was-nay's and 'ye's slowed down the flow of the story.
I like the distinctiveness, and I like that Chapman created a unique voice that was consistent throughout the book; but it never got to the point where it was easy to read. It was present at least once a sentence and I personally had to make that extra effort to process it.
Although I have to say, I LOVE the fact that this foreign nation's language is heavily littered with British regional colloquialisms (when I lived in London they could-nay understand owt I wa'saying).

Anyways, I will definitely be continuing with this series.