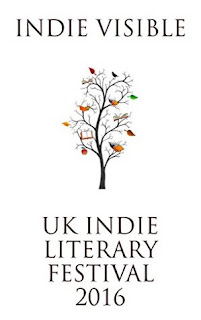 With a mixture of exclusive short stories and extracts from other works, there is something delight every reader.

Not only does Indie Visible unite some of the most exciting talent in the independent publishing world, it also strives to change the lives of children. Supporting the work of Lumos. 50% of the profits from each book sold will be donated Lumos, ensuring the vital work they do can continue, helping children and families all around the world.


So pick up this book and discover why we really are indivisible.


Review
An array of short stories and extracts from the authors attending the UK Indie Lit Fest.

First thing I would like to point out, is that even though this book is giving 50% of its profits to the children's charity Lumos (a great reason to buy a copy, peoples); this book is not suitable for children.
There are no kids stories, and some of them contain bad language, violence and adult themes.
You have been warned.

With 16 stories and a variety of genres, there's something in here for everyone.
I have to say that there were a couple of stories that aren't my preferred reading genre that really grabbed my attention, which is always good.

So, 16 lovely little stories and extracts - I'll be giving a breakdown of them all below for your reference, but in the meantime, I'm going to list my top 6.
I know, I know, I was going to go for top 5, but I couldn't decide which story to cut so... top 6.

In Exchange by Steven M. Caddy
Extract
Sci-Fi - introduction to Michael, who was born on a space station and has become something of a science experiment, having never stepped on Earth. Interesting ideas, but the chapters were clearly just laying the foundation of a bigger story.

Dead Normal by D.M. Singh
Extract? (felt like opening chapters, I'm guessing of her new work)
Contemporary/Fantasy - poor Amanda dies in very unfortunate circumstances. Oh, and Death is called Derek. I could not stop chuckling at this, even though it covers some serious issues, it balances it up with light moments.

Marked For Freedom by Claire Colley
Short Story
Contemporary/Abuse - after years of being subject to her father's controlling ways, Nan finally decides to make her escape.
OK. I do not like abuse stories. They just don't do it for me, so it's one of my no-go genres. But... I really liked this short story. I think I held my breath for the entirety of Nan's escape, it was so tense. And the ending was very positive.

Hunting the Priest Killer by C.S. Woolley
Short Story - as a part of her Nicolette Mace series
Crime - the blog of an investigator. Nicolette makes daily entries on her hunt for a killer, how she toes the line or breaks the rules to get what she needs. I thought this was good, but I might've enjoyed it more if I'd read the series first and knew the characters.
The blog is an interesting narrative tool, but did mean any exciting scenes were written as recaps.

Storm Creature by Maria Gibbs
Short Story
Contemporary - every storm brings with it a haunting presence for Lucy. At first, I found the present and 8 years earlier a little disjointed, not knowing how the threads would come together. About halfway they do, and it makes a nice little ghost story.

Sebastian Drake's Short Life of Darkness & Death by Laura Morgan
Short Story
Crime - the making of a serial killer. Lina visits her ex-boyfriend as he waits on death row, which inevitably leads to remembering the steps that had led him there. Yes, this is a good one, centering around a dark romance and murder. That's all I'm saying.

Love Lost by Rose English
Short Story
Fiction - with a bit of romance, loss, ghosts and historical setting - a bit hard to fit in one genre! A sweet little story of Emmeline and the loss of her dear husband. It is a very pleasant read, although I felt it jumped about the timeline a little too much for my liking.

Mr & Mrs England in Canada's Happy Province by Roger Gordon
Extract
Biography - interesting introduction to Newfoundland. I don't normally read biographies and non-fiction, but Gordon's writing really drew me in, and it was a pleasant meandering around a new town.

The Sands of Time by Felicity Snowden
Extract
Mystery - following two lives in Whitby, both with impending trouble. Lou visits friends Whitby in 2014, only to lose his sister (and possibly a little bit of sanity). Kate is a young lady in 1914, doing her part for those found injured by the sea, but finds a strange man with no identity and no memory.
Two very distinct stories, and within the extract provided there are no links between the two. I still enjoyed them - Kate's most - intrigued what the full story is.

D: Darkest Beginnings by Chris Turnbull
Short Story - prequel to Whitby's Darkest Secret
Dark Fiction - a young lad being dealt cruel hands. This follows a very average boy who has a spate of bad luck and mistreatment from others, which all shapes him towards... This reads like historical fiction, and the author keeps a neutrality that makes the horror all the more startling.

Moth Girl versus The Bats by Michael Wombat
Short Story
Steampunk Adventure - battling the mechanical bats and malevolent mastermind. When Thea's city is attacked, she steps up to hunt down the person behind it. This was a lot of fun, a comic-book in action!

The Wedding by C.S. Woolley
Extract
Fantasy - tensions boiling over at a royal wedding. Different factions clash to stop Mercia marrying a new princess. Lots of action and passion in this one. I think I'd enjoy this one more if I'd read the series first, as there are a lot of characters to follow.

Kristen: Witch-Hunter by K.S. Marsden
Short Story - an accompaniment to the Witch-Hunter trilogy
Fantasy - Kristen Davies has plans; graduating high school, and making the most of being the school’s star athlete. Her plans don’t involve witches, but what’s a girl to do when evil strikes.
Kristen is awakened to the very real threat of witches, and has to dredge up her forgotten roots, to take her rightful place.

Pettycur - Kinghorn to Kirkaldy by Diana Jackson
Extract
Contemporary - Pettycur & poetry. This short extract has a few different threads to it, and a bit too short to explore them. I'm not a big poetry fan, so can't comment on the poems.

The Falconer by Rachel Cotterill
Short Story
Fantasy Murder Mystery - Roan has to prove that a member of the royal family was murdered, and by whom. This was a fun little mystery, based in a world that felt very real and well-established. Even though it was short, it provided great characters, with their own roles to play.

Pas de Deux by Alex Brightsmith
Short Story - part of the Kathryn Blake stories
Crime - jewel thieves and double-crossing. Kathyrn plays a sharp game to get what she wants. This jumps straight in with a very cat-and-mouse play before establishing the characters. Along with the narrative being a little too playful in its wording made this hard to follow. I imagine it would be more enjoyable if I read some of the other stories first.