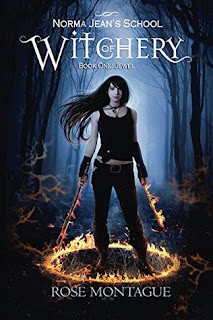 Synopsis
Jewel has a problem. She's in a witch school and can't get the most basic spells to work. Her true magical talents must remain hidden. That might be hard to do with a killer on the loose. Murder, mayhem, and magic with a little romance along the way.

Review
After losing her parents, and a summer spent training with a witch, a vampire and a shifter; Jewel is about to start a new school, to learn more about her magic and witchcraft. How far can she trust her new friends with her secrets? What secrets will she discover?

I've been wanting to read this for ages, and with it being the Indie Book Club's book of the month. I mean, that cover is pretty fantastic; plus it's about witches.

I really enjoyed this. It follows Jewel as she gets used to life at a new school. After spending her time with her foster family (who all happen to be awesome and powerful), Jewel she gets to discover her strengths and weaknesses in comparison to the rest of the witch high school community.
Jewel was a fun main character. She is very self-sufficient and capable no matter what is going on; but she is also friendly and loyal to those around her. I found it refreshing that she is popular in her new school, that she attends and brings these groups of people together that hadn't been that close before, and they all get on fantastically. She's a magnet for those around her, regardless of what clique they should be in.
Jewel is amazing at martial arts and doesn't waste her time boasting or being overly-humble. She gets on with her training and enjoys learning everything she can.

Her friends are all interesting, and a love interest in Elgon, who is supposed to be a Chris Hemsworth look-a-like (I approve).
If I'm being picky, I sometimes felt like the friends and background characters were all interminable, and it was hard to recall which name belonged to which person.

The plot rolls out, with the first half establishing the school and dynamics in a fun way. In the latter half, this naturally builds to an explosive fight to protect their friends and their own lives against some rather shady people that will go to drastic lengths to get what they want. It was very creative and had plenty of action.
There aren't any great surprises in this story, you know how it's going to play out fairly early on, but it was enjoyable to read all the same.

((This has no bearing on my rating of the story)) I bought my copy from Amazon at the beginning of April, and I found it had a lot of formatting errors regarding paragraphs and speechmarks. Too often different character's speech would follow on with no spacing to show it was someone new. A lot of speechmarks were missing, so you didn't realise this was dialogue and have to go re-read it when you get to the end of the section. These are simple problems that shouldn't take long to rectify.

So, overall I really enjoyed this book, and I will definitely be looking into this series, and the Three J'Amigos!